The Lord has led me to open Morning Glory on Thursdays to other authors who have learned to find evidence of God’s Presence in their darkest moments. Isn’t it wonderful to know that He is no respecter of persons? The things He shows me, He shows others. When we seek Him we will find Him. I pray that if you’re seeking God today, your heart will be awakened to His goodness and His faithfulness to reveal Himself to His children.

I’m excited to introduce Carol Heilman to you. She’s a sweetheart. Like me, she’s lived long enough to know that what God says He will do, He will do. But He doesn’t always answer our prayers the way we expect. I hope the words of Carol’s heart will encourage you today. At the end of the post I’ll be sharing about her upcoming book, Agnes Hopper Shakes Up Sweetbriar. It’s a hoot! Christian fiction at its finest.

Have you ever prayed for what seems like to you a reasonable request, one that you think ought to be a part of God’s plan, only to witness your life falling apart like pieces of shattered glass?

You ask yourself what in the world happened? And why? I can become bitter when things don’t go my way. Or I can rest (abide) in the Lord and choose His peace and even joy.

Our pastor recently gave some examples of unanswered prayers. Paul prayed he could travel to Spain with the Gospel message. Instead, he lived out the last years of his life in Rome under house arrest and tethered to a guard. Does that make any sense? If you examine the facts, it does.

Paul’s guards were changed every six hours, and they held high positions in the Roman government. Did Paul lament his situation and pine for Spain? No, he talked to these men about Jesus – for hours on end. And that became one reason Christianity spread to people from all walks of life.

Take a look in your Bible at the lives of Peter, Moses, Joseph, or David, just to name a few. God used them in mighty ways, but they didn’t exactly live on easy street in the process.

In Gates of Splendor you can read about Jim Elliot who didn’t get what he prayed for – to witness to the Auca Indians of Ecuador. Also read Living Like Lions by J.R. Duren to learn about twenty men, past and present who gave up everything to God in complete submission. What became the most important thing in their lives? Not their own happiness or what might make them comfortable on this earth, but to live close to God. Duren included Jim Elliot as one of twenty men who lived like lions.

Another example comes from Haiti and Steve and Judy Revis, missionaries who have served there for over twenty-five years. In addition to his drilling wells for clean water, they ran a school for deaf children outside Port au Prince, a daunting task, but one they loved and bathed in prayers. Then one day they found themselves in the middle of a “takeover.”

Some of the teachers wanted the school for themselves and they enlisted some of the older students to join them. An ugly situation developed, threats ensued, and this missionary couple fled for their lives.

The school has since dissolved and is no more. But God had a plan. Now teachers, those who had no part in the uprising as well as new, godly teachers, go out to the surrounding villages to teach the deaf children. And because they do, the families are learning along with their children and there is far greater acceptance of the deaf ones by the community. This could have never happened if the school had continued to operate.

You or I may not always understand, but if we can trust our heavenly Father that is a huge step forward. He does have a plan, but delivering happiness to my doorstep may not be a part of that.

Carol Heilman, a coal miner’s daughter, married her high school sweetheart, a farmer’s son. She began writing family stories, especially about her dad’s Appalachian humor, for newspapers and magazines. One day her mother said, “We don’t have any secrets any more!”
Carol’s book, Agnes Hopper Shakes Up Sweetbriar, was inspired by her mother’s spunky spirit and her dad’s humor.
She lives in the mountains of NC with her husband of fifty-plus years. They love to play cards, go antiquing, hike, and visit grandsons on the east and west coasts. 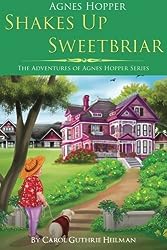 Visit Carol at  www.carolheilman.com
Agnes Hopper Shakes Up Sweetbriar releases January 29th. Check out all the details at
amazon.com/author/carolheilman

Scriptures of Encouragement ~ A Serenade of Praise

Scriptures of Comfort ~ No Longer Bound